Some of my regular readers, i.e those with small lives animated by narrow goals, will be uninterested in this post. Please check back tomorrow during regular business hours for the latest in grocery store openers, yoga studio game, and the 100% guaranteed third-date bang recipe. Self-mockery? Posts already written and waiting patiently in my drafts folder? Sometimes I don’t even know for sure. In any case, today’s post will appeal only to the faggy book-learnin’ sorts among you. If that’s your thing, forward ho.

It’s an exciting time to be a Reactionary. New faces, or at least avatars, are popping up everywhere. We even appear to have settled on a name that I fully approve of: The Dark Enlightnment.

Foseti, Nick B Steves, Spandrell, Xenosystems, Koanic Soul, Jim, Habitable Worlds, Vox Day, Radish Mag and Free Northerner are just the opening salvo in the Cambrian explosion of crimethink that appears to be taking place. If you’re new to this corner of the ideaspace, put on a pot of tea and come back in a few months – Free Northerner has kindly put together a reading list which should get you up to speed with all the latest in Reactionary thought.  We’ll be here for a while, at least until Google passes our home addresses along to DHS.

I won’t bother with a link round-up of the week’s theorizing, as it’s easier to point you towards Radish Mag’s D&D themed issue 2.8. Or is it Magic The Gathering? Pardon my ignorance, I had +2 charm in high school.

For the visual learners, Scharlach at Habitable Worlds has done us the kindness of putting together a topographic model of the Dark Enlightenment: 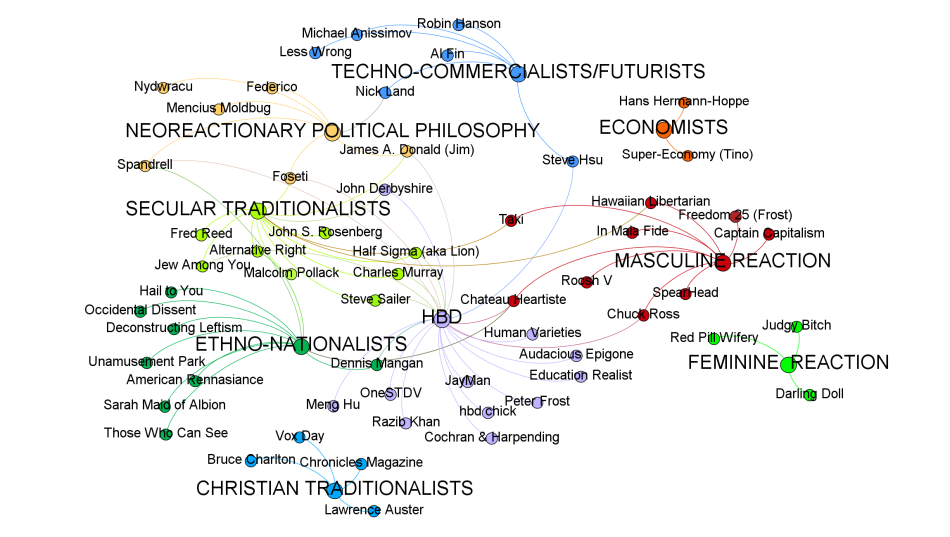 So what’s driving this new desire to describe, delineate and taxonomize the Dark Enlightenment?

In a word, growth. There was a time when a man could comfortably follow every single Dark Enlightenment blog and comment thread in no more than ten or twenty hours a week. The Dark Enlightenment was a small enough tribe that every single blogger and regular commenter knew one another, and everyone was basically able to stay up to date on everything that everyone else had written.

This is no longer possible. There are too many DE writers worth reading for any one individual to absorb and synthesize them all. We have reached our limit as a hunter-gatherer tribe of truth-seekers. It’s time to become scalable.

Moldbug has written a few essays on our eventual evolution from a rag-tag online community, into a serious and credible threat to the status quo. Please take a minute to read them if you haven’t already: Restarus: A Social Revision Engine, Revipedia, and Uberfact. The Future Of Search, and Open Letter 9d are also relevant. Taken together, these essays are as plausible a description of our path to victory as I’ve ever seen. As an intellectual movement, we have grown from nothing into something. However we are still a long, long way off from a fully armed and operational counter-Cathedral.

Maybe it doesn’t matter what we do now. Maybe the combination of the internet and truth is an irresistible force. But the left still has cards to play, and even if the fall of the Cathedral is  a foregone conclusion, I’m quite happy to contribute to the cause of expediting the process. Honestly, the 20th century has bled on long enough. It’s time to break out the field knife and put it out of its misery.

I suggest that, looking forward, we focus on two principles: Humility and Specialization.

Humility is necessary because the Dark Enlightenment will continue to attract better and better people. I consider myself a smart enough fella, but I’m not at all ashamed to admit that I’m not operating on the same level as the sharper writers listed above. The nature of the Dark Enlightenment is that it attracts extremely bright and curious people. As it gains traction and our ideas are exposed to a wider base, the standard for inclusion into the upper echelon of thought leaders will increase as well. Some minds just burn brighter than others, and there will hopefully come a day when most of us are considered intellectual lightweights unworthy of serious consideration in high-level discussions.

As Reactionaries, the humility to accept this should come naturally. We must be accepting of nature and the limitations it imposes on us. We must be willing to kneel, and defer leadership of those most fit to lead. If you are not comfortable with the strong likelihood that you will play no more than a transient and minor role in this great project, you have picked the wrong movement.

But while it’s lonely at the top, there is still much work to be done. Which brings us to my next point:

We need artists and speakers and marketers to brand and proselytize our cause. We need programmers and engineers to design our weapons. We need scribes, connectors, and social hubs to manage and catalog the Dark Enlightenment. We need specialized counter-Cathedral academics, journalists, and entertainers. We are building a complete replacement for the myriad of institutions which report to the Cathedral – The USG proper, her Anglosphere and EU satellites, the Universities, Colleges, Schools, Literati, Entertainment Industry, Churches, Foundations, and even temporary counters to Dalit street gangs. The Cathedral, interpreted broadly, employs tens of millions. A successful opposition will need manpower on a comparable scale.

So what sort of exciting opportunities are available in this growing organization? Here’s my rough first pass at classifying the sort of men we need:

At the top of our org chart, though most likely behind the scenes and destined for obscurity, we have the brilliantly analytical minds that can engineer a solution to our modern predicament. They are the builders, the quiet geniuses behind most of the great innovations that the human race has developed. Moldbug was the first, the man who taught us – or taught me, at least – that things haven’t always been as they are, nor will they always have to be.

Planning the Reaction will be easy compared to the next great task of making that plan cool. The Dark Enlightenment needs more than just logic. It needs narratives, heroes, and myths. Can you do a better job of writing The Great Manosphere Novel than I did with A Generation Of Men?  I certainly hope someone can. Get out there and do it. Other fine ideas include blogs, podcasts, independent film, stand-up, music, and whatever other media we can produce by and for the Reactionary counter-culture.

Brilliant young programmers, how do you want to use the gifts you’ve been given? Designing new ways for housewives and retirees to wile away their sad days? Or honing the weapons of the righteous in the war between good and evil?

The Reaction needs digital currencies to bring down the central bank. We need cryptographic weapons systems to protect sovereign property rights from internal threats. As our governments crack down on crimethink, we will need digital tools to ensure our privacy and anonymity. We need tech-savvy spies to discover and disseminate the secrets of the Cathedral.

Christianity is either a beautiful and resilient set of useful reactionary myths about the nature of the world, or it is the literal word of God. Either way, any true Reactionary movement will march under the cross.

Among the many reasons why a Christian Reaction is preferable to a secular one, is that once the historical crimes of the Cathedral are properly accounted for, there will be no possible secular case to be made for any sort of mercy. A successful Reaction in which the victors feel unbound by Christian ideals of forbearance and charity will lead to mass killings on a scale that will make the mid-20th century look like a day at the beach.

There’s just one problem: Modern Churches range from the heavily compromised, to the actively and enthusiastically Satanic. Modern Christianity exists only in the Word, and in the hearts of Christian men. The Church itself has been stolen. 21st-century clergymen, do you intend to do something about this? Or are you just going to stand there and bleed?

As Nick B Steves put it, “The Cathedral stole Christianity…Well, let’s steal it the hell back!”

Persuasion is an amoral tool, like a hammer. A hammer can be used to build a house, or cave in a child’s skull. There is no such thing as a crowd of philosophers, and insofar as some degree of mass support is required for a successful and clean Reaction, we need Machiavellian manipulators to command and seduce the unwashed masses into obedience.

Reading the news lately? Skirmishes are breaking out. When the lights go out, when the police are in hiding, when the Euros are worthless, and the supermarkets empty, the West will need strong men to organize and lead decent people on a micro scale.

If you have nothing else to give, give fealty. It is in every man to recognize righteousness, and choose to take orders from it.

We all have our gifts. Young men of the western world, do you think that the defeat of the Cathedral is a cause worth fighting for? Fighting is an option, you know.

We also have the options of cowardice, ignorance, or allegiance to evil – all paths that are potentially quite rich in earthly rewards. The God-fearing man does not have a difficult choice to make, but I ask the secular: Afterlife or not, might there be worse fates than running afoul of the PC police? Living a craven life and dying a coward’s death, for example.