In just three months, Trump has utterly destroyed the legacy Republican Party and its media outlets, salvaged useful parts from the wreckage, and is now the commander-in-chief of the American Conservative movement. The GOP establishment, right-wing media, and everything else that used to constitute American Conservatism, now exist in subordination to Trump.

Let’s consider how this happened, and what it means for the future of the American Right.

The legacy business model of the Republican party was simple: do a passable job of pretending to represent the interests of Vaisya America, so they’ll give you a pass when you inevitably sell them out. Kind of like how the Democrats’ political machine earns 90% of the black vote while implementing policies that destroy black communities.

This business model is stable when news and opinion are throttled by media organizations acting in coordination with the central party. The message is controlled. The Overton Window creeps gradually leftward. Middle-American political will is dissipated harmlessly toward tax cuts for hedge fund managers and support for Rah Rah Rah Team America adventures in far-away countries.

But when the internet allows maverick candidates to bypass the gatekeepers and communicate directly with their potential supporters, all hell breaks loose. The old rules no longer apply.

The first iteration of this new dynamic was the Tea Party – an unsophisticated, low-brow, and ultimately unsuccessful attempt to transform Middle American resentment into political power. It failed for a lot of reasons, but the emotion it tapped into – the Republican base’s recognition that they’re being played – is a massive potential opportunity.

This is common knowledge to anyone who’s read his books. His first autobiography, The Art Of The Deal (Amazon) is a collection of stories about Trump recognizing and capitalizing on big opportunities that others were ignoring. My guess is Trump looked at the American Republican party and said to himself:

These losers are doing a terrible job! They care more about being “respectable” in the eyes of their opponents than they care about their own people. I bet I could come in and kick their asses.

As of today, polls have Jeb at ~5%. Mom and Dad have told Jeb to stop sending good money after bad, and Jeb has started to lay the memetic foundations for a petulant, self-important, ego-preserving exit:

I’ve got a lot of really cool things I could do other than sit around, being miserable, listening to people demonize me and me feeling compelled to demonize them.

Asked by the Guardian how much of a role his donors had played in the decision to cut the payroll of his campaign staff by 40% on Friday, Bush replied with anger.

“None. That’s me asking for it,” he said, in an example of what are becoming rare exchanges with a reporter. “The donors are happy. In fact, I’ve been raising more money.”

The tone got tetchier still the next day, when he was asked in South Carolina whether the cuts meant his campaign was struggling.

Jeb’s campaign is floundering so badly, some suggest Trump should ease up on the poor guy:

Americans love a fight but hate seeing you kick a man when he’s down. Trump’s coming close to a mistake by bringing heat on pitiable Jeb.

Imagine just three months ago, predicting that Jeb Bush – with all his money, connections, name recognition, party establishment backing, and political experience – would be doing so badly, that smart people were concerned that picking on him would be perceived as bullying. Jeb is the anointed heir to one of America’s most powerful political dynasties, and he has been reduced to the indignity of Middle America’s pity.

In an interesting coincidence (¿coincidence), Trump The Merciful subsequently decided to dial it back:

This the sharpest shiv of the campaign so far, deadly in its simplicity. Jeb is no longer worth attacking. Jeb is out. Jeb is finished. Jeb has been crushed totally, and there is nothing more to gain from beating a dead caballo. 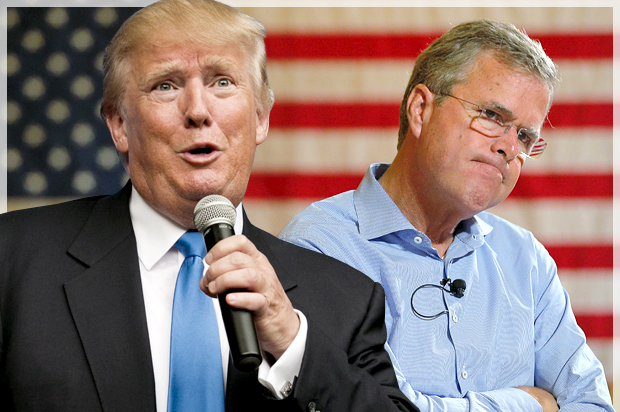 There are still a dozen other Republican hopefuls, but after witnessing the ¡Jebacle, is there any doubt that Trump will make short work of them, and Hilary thereafter?

Actually, yes there is.

Most journalists are still in denial

Mainstream media pundits across the spectrum are united in their conviction that Donald Trump is a clown and a buffoon who stumbled his way through the most successful primary campaign in modern political history.

With cognitive dissonance like this, it’s no wonder the commentariat has burned the last of its credibility with the Republican base.

I count exactly one person who’s been predicting Trump’s success from the beginning: Scott Adams, creator of Dilbert and trained NLP/hypnosis practitioner, who recognizes the advanced persuasion technology in Trump’s communication strategy.

Adams describes Trump – correctly, I think – as a wolf among sheep, a candidate playing the game on a different level than everyone else.

Donald Trump is a new disruptive technology in a broken industry

Trump is Uber for American Democracy, while the likes of Jeb Bush, Marco Rubio, John Boehner, and Rand Paul are a gaggle of confused and unemployed taxi drivers, picketing City Hall with impotent rage at a new phenomenon they’re not equipped to understand.

Just like taxi companies couldn’t see how ride-sharing would crush their business, legacy Republicans lack the self-awareness to understand how irrelevant they’ve become, and how little they can do to stop it. If Jeb’s campaign continues hemorrhaging money and credibility at this rate, he might literally be driving a taxi cab before the end of primary season.

How Smart Is Donald Trump?

Is Donald Trump a silly clown who stumbled his way into billions of dollars and the most successful primary campaign in modern political history? Or is he being wildly underestimated?

Democracy is the theory that the common people know what they want, and deserve to get it good and hard. Trump is giving America simplicity, and he is winning. That might reflect poorly on Americans (or it might not – some problems really are simple) but it doesn’t tell you anything about Trump.

Consider the following graph, which shows the reading level of SOTUs throughout history:

Trump’s speeches, clocking in at a 5th-grade reading level, are literally off the chart, and he is crushing his opponents. Nobody ever went broke or lost votes underestimating the intelligence of the American public.

Whatever the outcome, Donald Trump heralds a revolution in political marketing

All they need is a policy platform that genuinely reflects the interests of their base, a Master Wizard to run their communication, and a man of substance and conviction – a true Carlylean hero – to lead them.

Western Democracy is about to get a lot more interesting.