Thumotic
Home Lifestyle How To Protect Yourself From Bullies 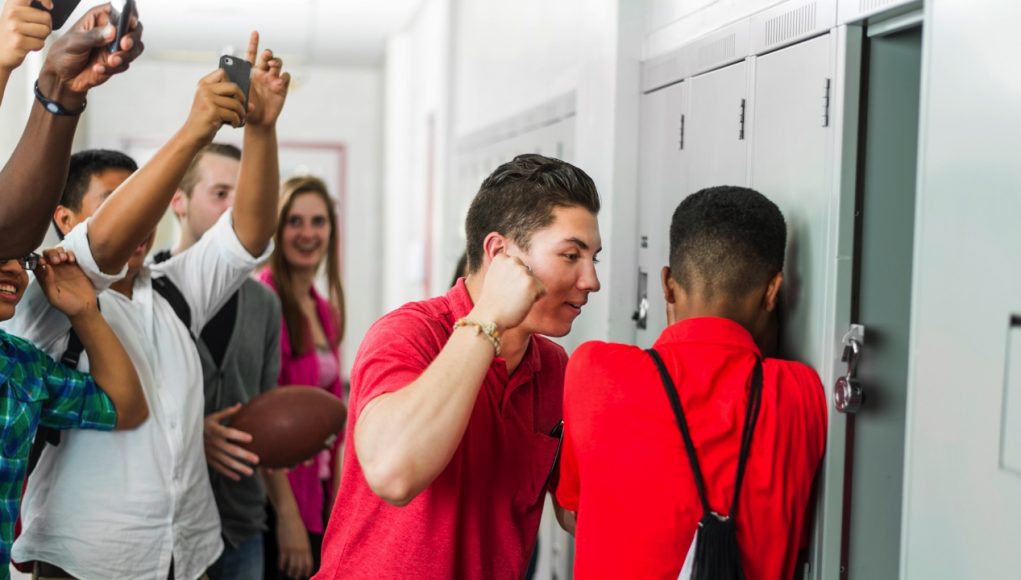 This post is a short guide to protecting yourself from Hillary Clinton-supporting bullies in your personal and professional life. It will be most useful to people – like myself – who are Donald Trump supporters, but live and work in communities of Clinton supporters.

If you live in a traditional Red state and work in a field that permits freedom of conscience and association, your probably don’t need this guide: you are allowed to share your political beliefs without fear of bullies trying to get you fired, ostracized, or physically hurt. Must be nice.

However if a critical mass of your peers are Clinton supporters – i.e., if you’re a white collar professional in a coastal city – it’s hard to be honest about your Trump support without exposing yourself and your family to personal risk. For example, Clinton supporters might:

(Note that this video was actually recorded and uploaded by a Clinton supporter, who thought this video would reflect well on him and his impromptu gang. Sick.)

If you’re a Trump supporter in a Clinton-supporting enclave, its understandable if you’re afraid of vocalizing your support. Personally, I would suffer extreme financial and social hardship if I wrote positively about Trump under my real name. Many of you are in the same position. You don’t want to lose your job, have your car keyed, or end up like the woman above.

But just in case, here are a few things you can do to avoid the worst of the bullying from Clinton supporters:

1) Park your vote with Jill Stein or Gary Johnson

“Me? I’m voting for Jill Stein. She’s smart, dedicated, and I think 3rd parties are good for our political culture. I would have considered voting for Hillary, but I’m a bit turned off by the fact that she wants to start a war with Russia, and is under investigation by the FBI for corruption, and has been paying thugs to start fights at Trump rallies. Trump is just, I mean wow just wow. I actually think he is right about some things, like scaling back our military empire, cleaning up Washington, and rebuilding middle class jobs. But I mean wow just wow, like come on, Trump?”

(I’ve hammed it up a bit in this example, but you get the general idea.)

If you can’t march proudly into your office with MAGA-emblazoned gear, here’s my proposal for the next best thing: Orange ties.

Orange ties are not yet “a thing.” They won’t be a thing unless some of the New Media heavy hitters (Adams, Cernovich, others) decide this is a good idea worth pushing. But, orange ties are an excellent covert symbol for closeted Trump supporters. An orange tie is novel enough to be recognizable, but not so novel that you can’t plausibly claim that it’s just a tie. Personally, I plan to wear my tremendous new orange tie exactly three times between now and Nov 8th.

I encourage other ketman-practicing Brahmin deep cover agents to do the same, especially on election day. If this catches on, take note of which coworkers happen to wear orange on the 8th – give them a subtle, plausibly deniable nod, and start watching each other’s backs.

As the election nears, expect the tenor of Clinton-supporter bullying to reach a fevered pitch.

If we win, it will be easy and tempting to respond in kind, and offer an equitable response to a long era of Clinton-supported violence, ostracization and personal attacks. The ascendant American Right will be tempted to follow Defoe’s Shortest Way With The Hillbullies:

“Now let us crucify the thieves. Let her foundations be established upon the destruction of her enemies, the doors of mercy being always open to the returning part of the deluded people. Let the obstinate be ruled with the rod of iron.

Let all true sons of so holy and oppressed a mother, exasperated by her afflictions, harden their hearts against those who have oppressed her.

And may God Almighty put it into the hearts of all the friends of truth to lift up a standard against pride and Antichrist, that the posterity of the sons of error may be rooted out from the face of this land forever.”

But remember: Not all Clinton supporters are violent bullies. In fact, most are good, decent people who’ve been misled by a dishonest campaign and its media enablers. Outside of the tiny group of Clinton supporters who are actually profiting from the corrupt system, Clinton supporters are just regular people who are watching CNN (aka Time Warner’s YouTube channel), and reading the Washington Post (aka Jeff Bezos’ blog) and the New York Times (aka Carlos Slim’s blog).

I think it’s unfair to blame regular people, whose only mistake was trusting their prestigious mainstream media. After all, we’ve all been there. Every one of us was “plugged in” at some point, and eventually stopped being part of the problem.

Hillary Clinton is a bad person; her media enablers are bad people; her puppeteers are the worst people. But her rank-and-file supporters are a mix of overly trusting elderly people, brainwashed millennials, and various ethnic groups who don’t yet see how much disdain the Democratic party has for their guaranteed support.

Clinton supporters are better people than they’re pretending to be right now. They don’t want to be bullies. They don’t want to associate with bullies. In the coming weeks, #Hillbully supporters will be practicing regret and repentance for their mistakes; resist the urge to say ‘I told you so’, help them back up to their feet, and show them a path to a better version of themselves.

Seven Ways The Red Pill Will Improve Your Life